All of the Abbey College Manchester Community will be cheering on Marine AFC against Premier League Tottenham Hotspur in their FA Cup third round match this Sunday, 10th January, as one of the players will be senior football coach, David Raven. 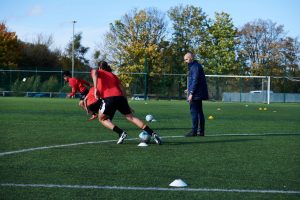 David has helped Marine AFC to get this far by being a key player in the other qualifying rounds. In fact, in their last FA Cup game against Havant & Waterlooville back in November, David was awarded Man of the Match by the BBC football pundits covering the game!

David is now set to play the team he made his professional debut against at the age of just 17 when he played for Liverpool, against Tottenham Hotspur at White Hart Lane. David made a total of just 3 league appearances for the reds before cancelling his contract and moving to Carlisle United. David then enjoyed regular professional football next moving to Inverness Caledonian Thistle and famously scoring against Celtic in a cup game.  As David is a centre back, he will be marking Harry Kane (England captain) during Sunday’s game.

Marc Arrowsmith, Director of Accommodation commented “It is fantastic that our own footballers have such an inspiring player and coach involved in their training and that they can benefit from the wealth of experience he has to offer from his 14 year career as a professional footballer. We wish David and Maine AFC the best of luck on Sunday. May their FA Cup journey continue.”

The Game kicks off at 5pm and will be shown live on the BBC.

Here is an interview with David after Marine’s win in the last round.